The Fed is likely to do something drastic this week. What about gold and crude oil?

Markets have renewed expectations about the Fed's actions after the latest January inflation data set a new high. In the latest Fedwatch data, the odds on the July FOMC are 50-50. In this week's forecast, although there are some changes, the 50 basis point probability is still clearly superior. 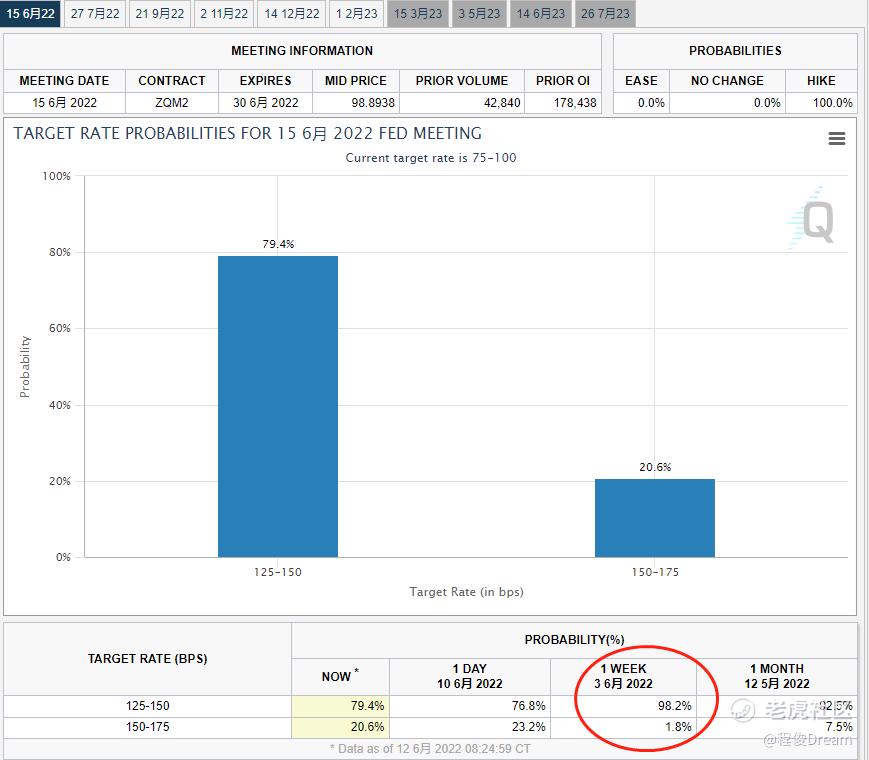 Data shows that the probability of a 50 basis point rate hike on June 15 is close to 8 out of 10. While that's a significant drop from 98.2% a week ago, as we've said before, it's stable at more than 70%. For comparison, the July data, also a week after the overwhelming 50 basis point hike, have diverged sharply. There is even a 50-50 chance of a 75 basis point rise.

The data suggest there is still a good chance that the Fed will not actively destabilize markets further this week. At the same time, it is an opportunity to give the market another chance to fully communicate that if next month's inflation data does not stop it, then July will be the time for action. It should be noted that the FedWatch data is changing, and we still have about 2 days to go before FOMC, so you can pay close attention to the data. If the probability of 50 basis points is less than 70%, then you should be careful.

In the markets, panic seems to have set in. The S&P has fallen vertically in the past three sessions and is almost flat for the week, not far from the low of 3800. The May lows are technically critical, and a new low every other month would signal the start of a new market decline. Combined with other risky assets, such as the recent volatility of ETH, the risk-off atmosphere has a "liquidation" intent.

Gold was down and then up on Friday, significantly outperforming silver (21.07, -0.18, -0.86%). Many investors don't quite understand why gold has rallied when interest rate rises are likely to be even more aggressive. First of all, inflation itself is a neutral factor for gold, and the two historically lack a clear positive or negative correlation. Second, when it comes to interest rates, there have been signs of decoupling between US bond yields and gold since early last year. Higher nominal/real interest rates, of course, are theoretically bad for gold as a non-interest-bearing asset, but don't forget that gold has a safe-haven aura. When gold moves in the same direction as the DOLLAR index, gold is likely to remain strong.

At present, gold (1825.02, -6.78, -0.37%) is still in a relatively middle range, last week's rally does not declare the bulls have won the full victory. It is expected that the market will first try to build a rebound high, and then again on the broken, will confirm strength. If the May lows are breached, then the thinking should change and gold may turn bear.

Crude oil (121.49, 0.56, 0.46%) has also started to pull back in recent sessions and it is still necessary to watch the performance of oil and US stocks. Rising oil prices and falling American stocks mean that an economic crisis will follow; Crude oil retracement U.S. stocks rebound suggests respite for correction; Both move in the same direction, up or down, in line with the correlation most of the time. In addition, considering the actual situation in the US, I believe they will take some action if oil prices continue to run high.